The former town of Waldo, Oregon is located in Josephine county on Waldo Road approx. 3 miles east in an area that was actually once part of Jackson county. There on the side of the road lies the landmark for the ghost town. That's all that is left besides the cemetery. On the day we went it was rainy and the cemetery was inaccessible. 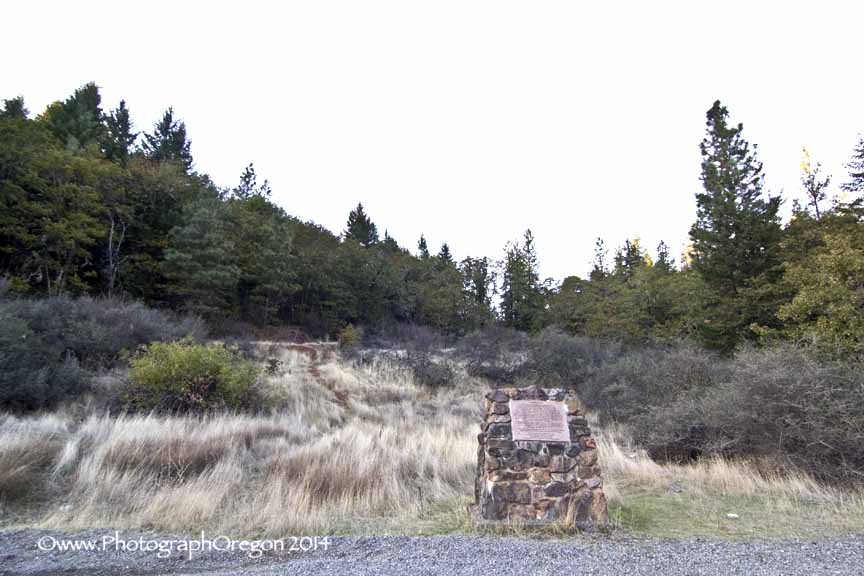 About three miles from the California border, which I believe we crossed while up on the hill looking at stunning deposits of serpentine, is where this little town, originally named “Sailor's Diggings" was located.

Sailor’s Diggings got its name because some sailors jumped over-board and discovered gold there around 1852 and it became a gold mining camp.

Several thousand miners lived there until the gold ran out. It was then taken over by outlaws, and not the nice kind. One of the nastiest, The Triskett gang, was aggressively ruthless. In 1852 they went on a crime spree killing 17 men, 1 woman and raping two other women.

Next they robbed the bank and the assay office. They were caught by the local posse outside of O’Brien.By then they'd buried the money somewhere around the hilltop . A shoot out occurred and gang members were killed so the estimated $70,000-$80,000 in gold was never recovered and is the fodder for local tales and treasure hunters.

The town got it's new name in 1853 in honor of William Waldo, who was the Whig candidate for governor of California. He campaigned there and convinced the populace that they should vote for him because he thought the local WAS California.

At it's peak this was a boomtown of 30,000 residents. In 1860 the town had three hotels, livery stable, several blacksmith shops, a bowling alley, a Chinese boarding house, saloons, and a brewery.

The cemetery is about a mile down before you get to the marker on the right. It's not visible and you need a 4x4 to get in to it.

If you are on a ghost town trek Kerby, once Kerbyville is about three miles north of Cave Junction on hwy 199 and has a great museum and some other really cool stuff.