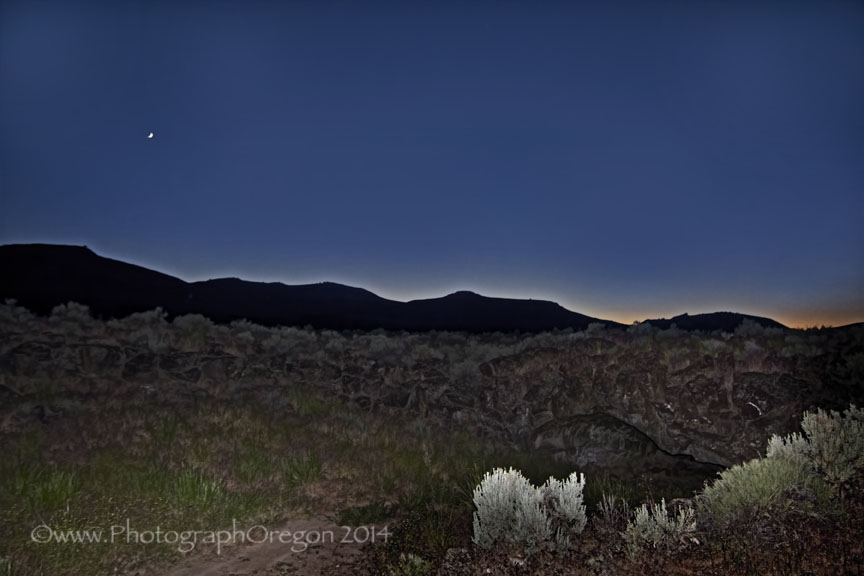 This cave is 3,000 feet long, with a varying height from 8 feet at the entrance to a approximately 20 feet farther back in the cave before the waterline.

A beautiful clear, COLD underground lake fills the lower end of the cave from little springs that you can see at the very back walls if you look closely. Where the water begins varies by season and rainfall. 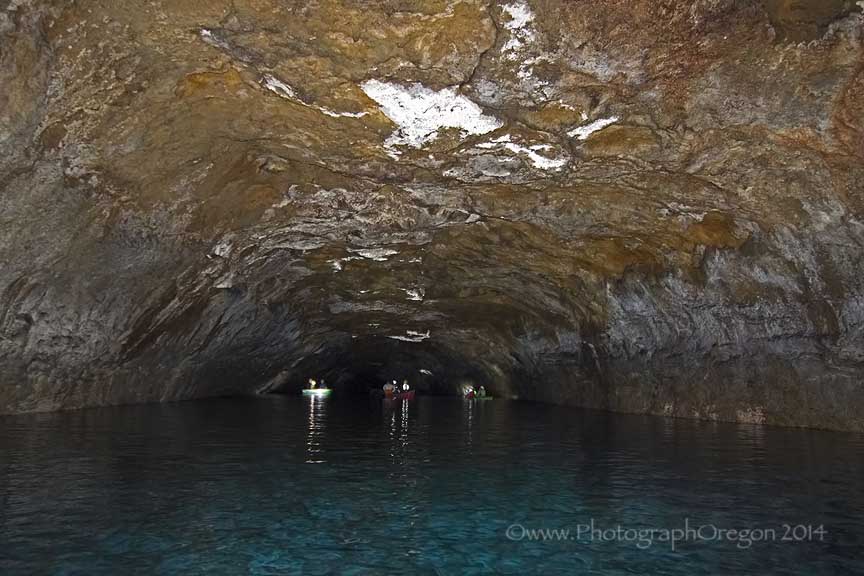 Our Oregon High Desert Grotto (Caving club) had permission to camp in and around the cave for the weekend. We pitched our tents in the area that still got a little light. 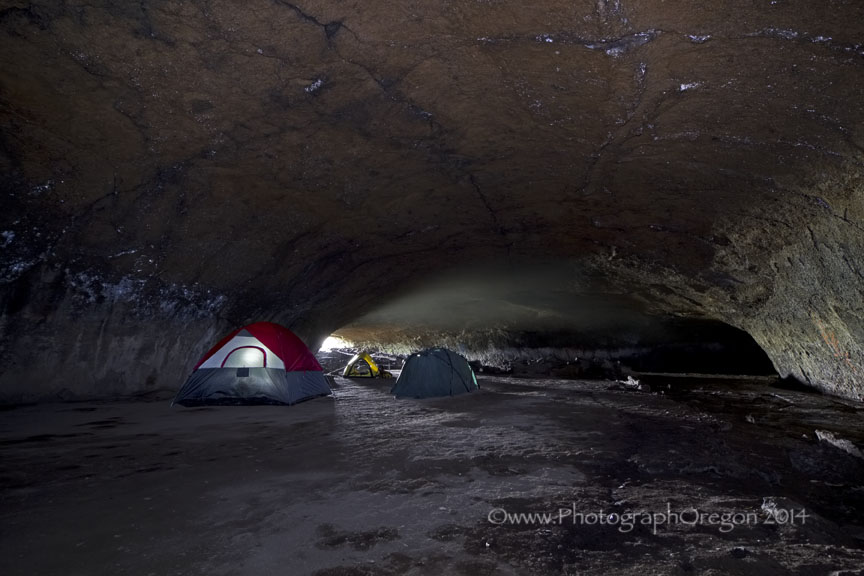 Next we hauled our boats about 1200 feet to where we could put in. 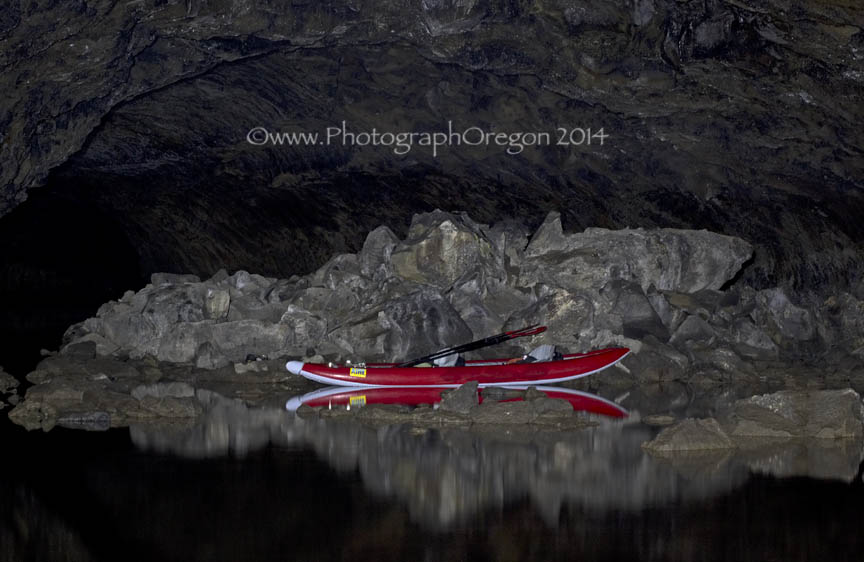 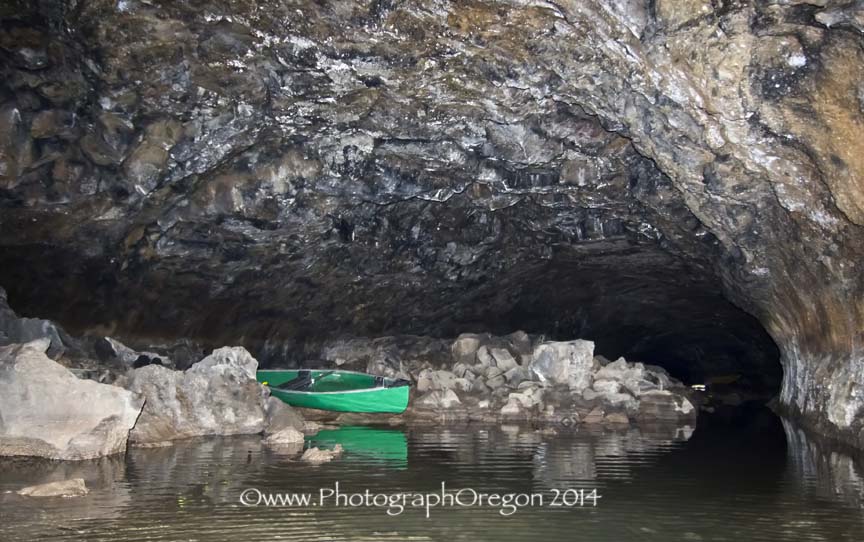 We had a fantastic two days of paddling around and exploring. On Saturday the club went down to where the upper chamber is and some people ascended on ropes up in to it. The rest of us stayed in the water and filmed. 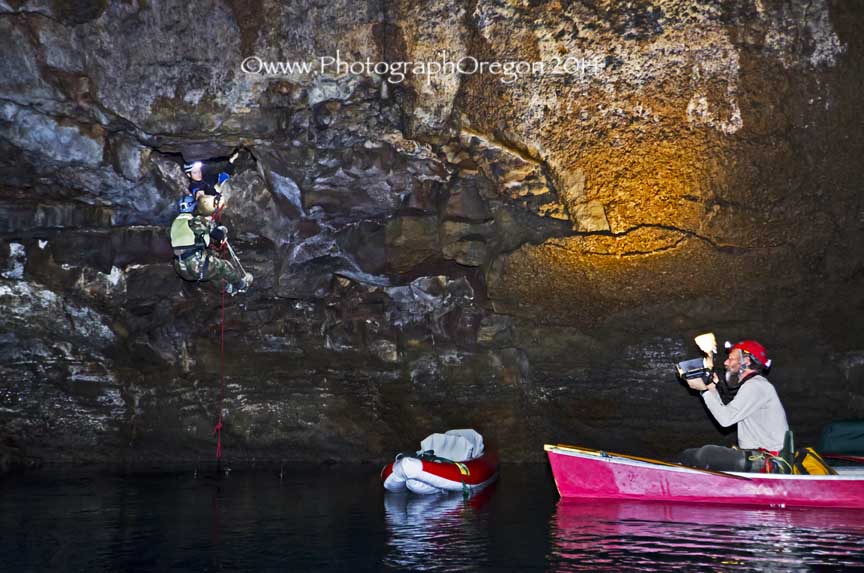 The colors in Malheur cave are amazing. 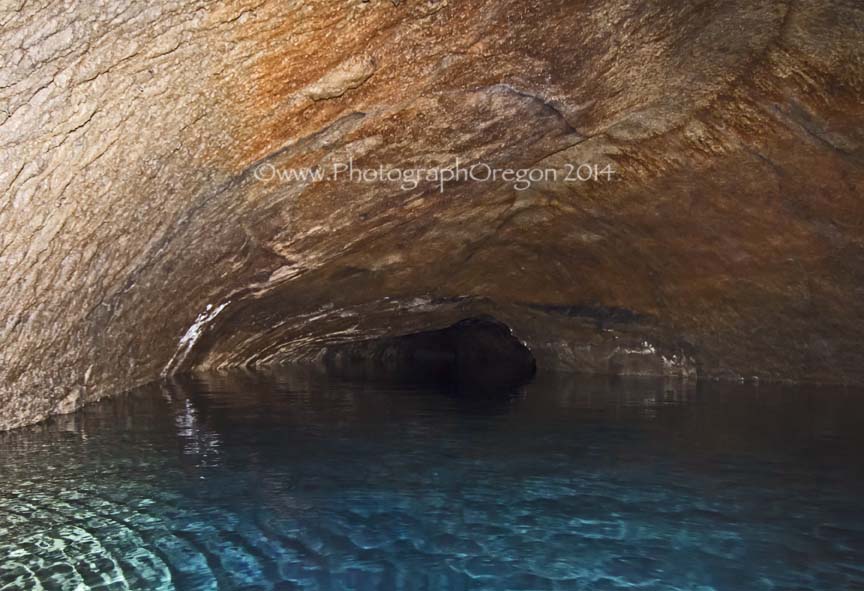 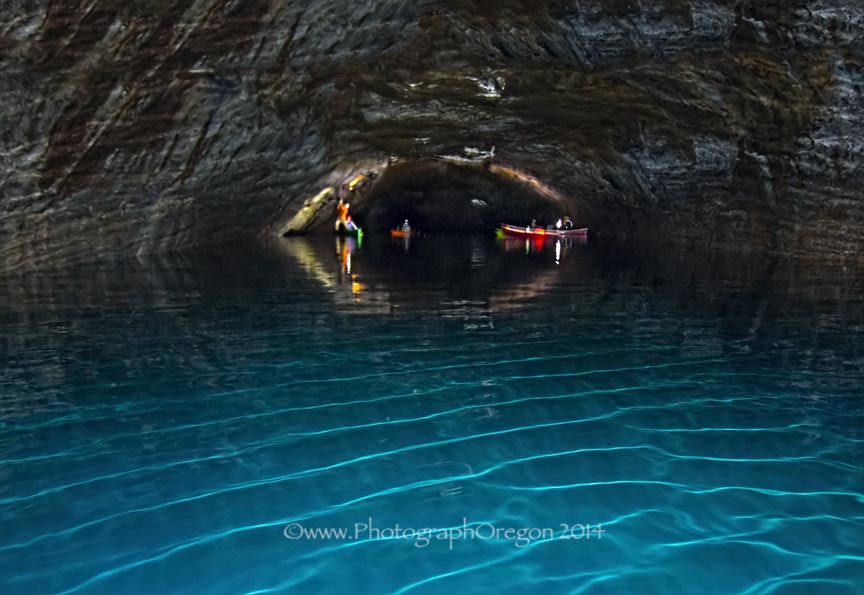 The cave used to be open to public use; however, because of vandalism, which is an ongoing problem for most all the caves, visitation without permission is discouraged.

You can see somehow, people still manage to abuse it. 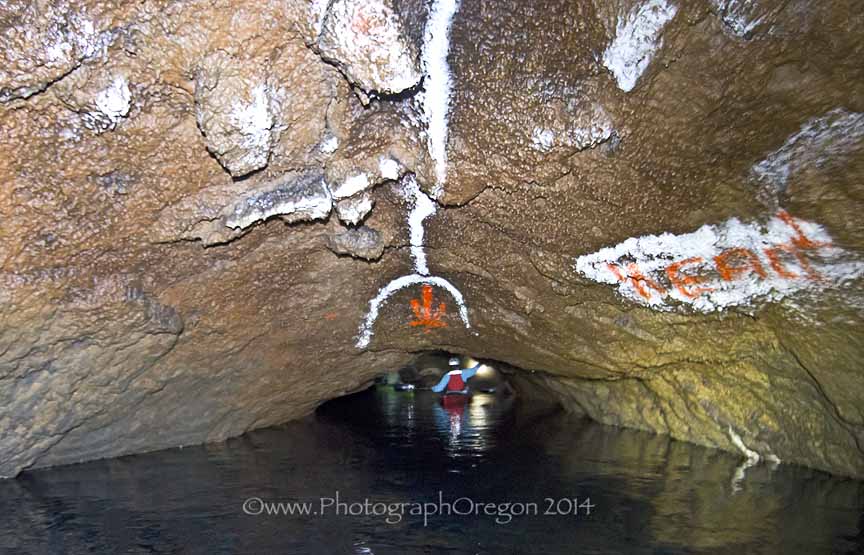 Paddling around inside and finding the perfect place to sing in the chambers was truly one of the best experiences of my life. Sunday was private church in a cave.

My nephew, Steven, who is a fantastic singer...like lead role, on stage, singer, and I sang for an hour. We even did The Star Spangled Banner.

(I'm the cool aunt who takes him caving...on water. For which he carried my boat out of the mud when I was struggling. ) 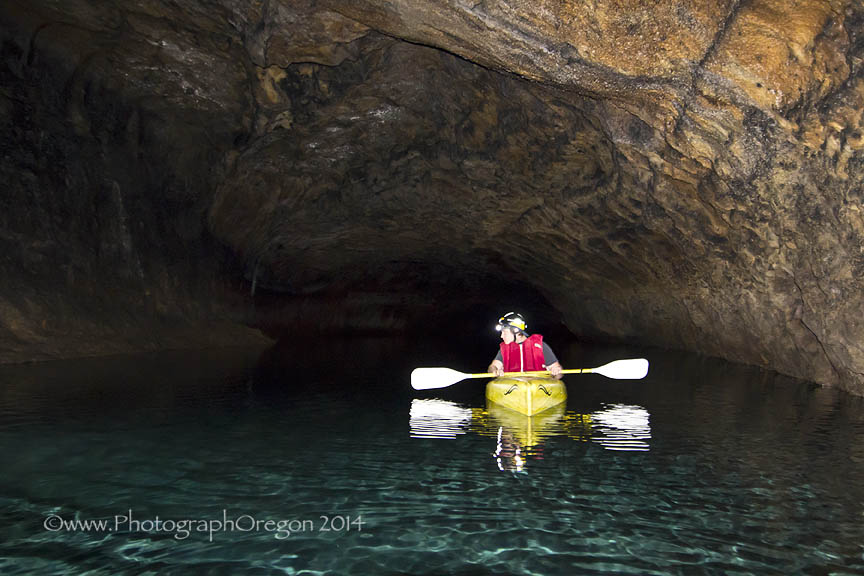 Along the way there are three sunken boats. One of them you can still read the wording on the side. 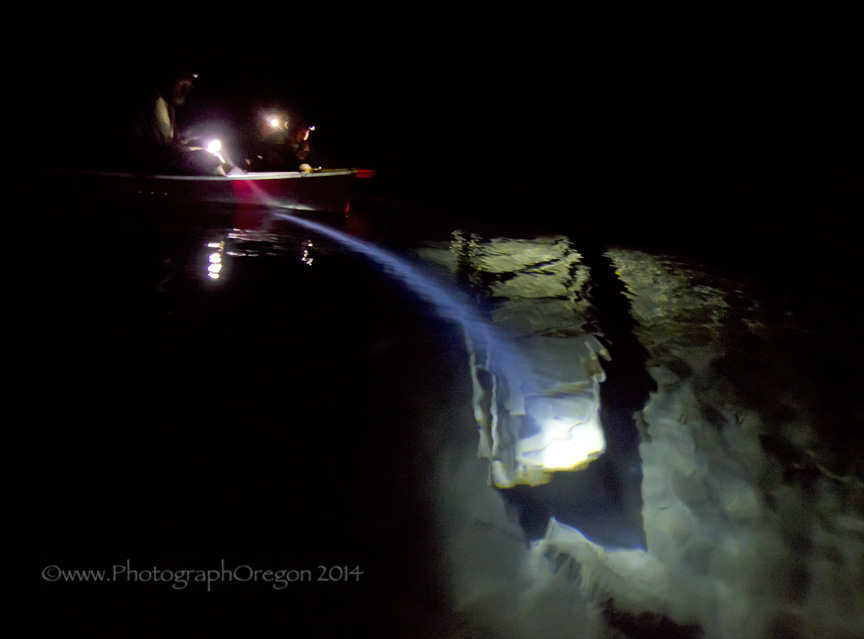 On Saturday night we stayed up late and played with some night star photography from inside the cave. 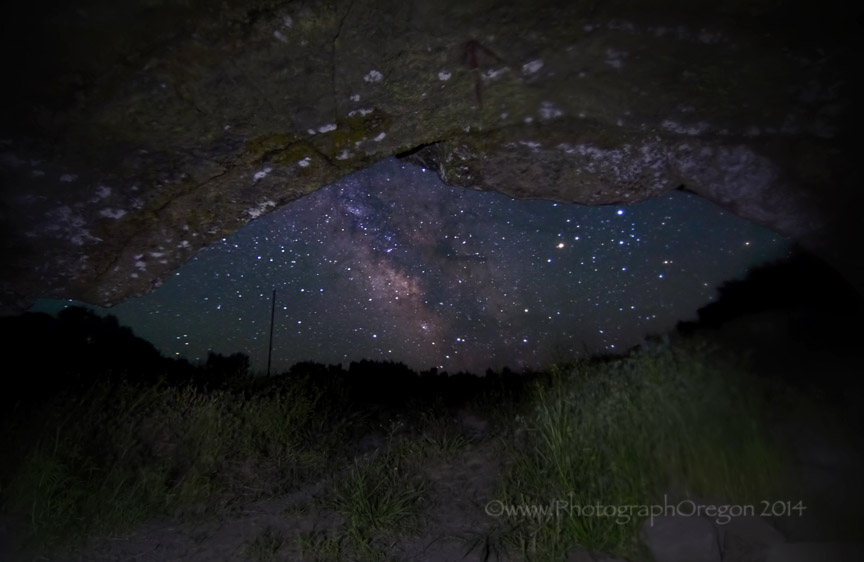 I also could not resist a little trick photography. These are the three Gingers! 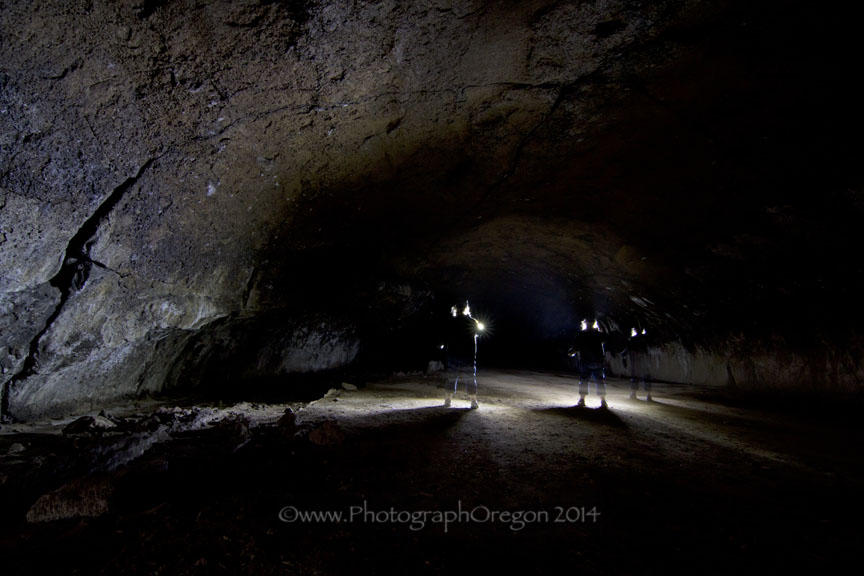 If you look closely you can also spot some ancient and modern (1929) rock art both pictographs and petroglyphs at the entrance. 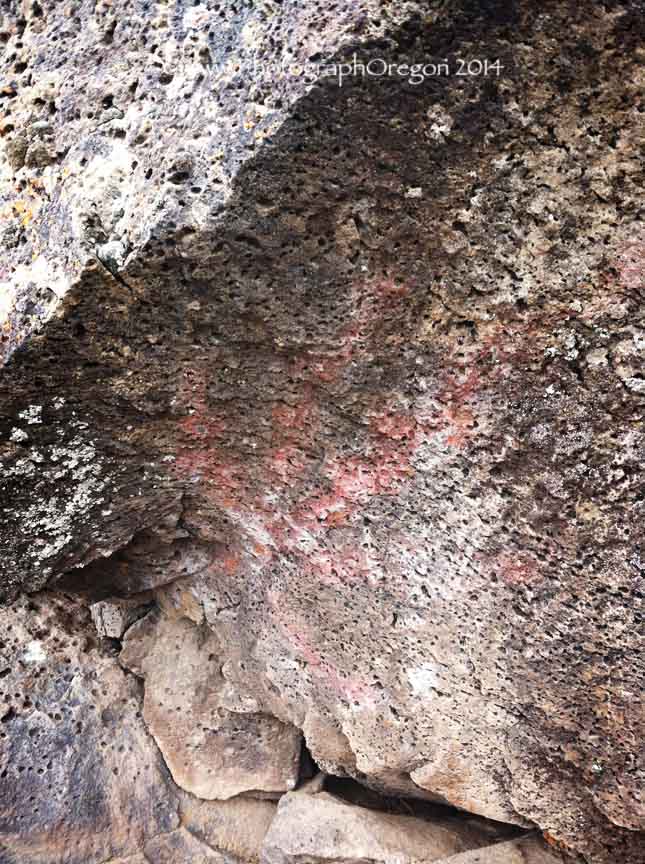 If you want to visit the cave you should first contact the Masons and Tree Top Ranches and get permission.

THERE ARE NO FACILITIES ANYWHERE NEAR THERE. Be prepared to “Leave no trace.”

(The following account of the legend of Malheur Cave, written by Julian Byrd, pioneer Burns editor, was given at one of the early sessions of Burns Lodge, held in the cave;)

Why the entrance to Malheur Cave was found barricaded by the first white man who visited it was told by Captain Louie, Paiute Indian chief who recently died in Burns; The legend dates back many years and Captain Louie had it handed down to him by an aged ancestor.

The legend was given by Dr. W. L. Marsden, a Past Master of Burns Lodge, at least 50 years ago and is retold from memory, therefore much of the detail is omitted because of the lapse of time and faulty memory; The essentials, however, are as follows:

Many, many years ago, long before the white man came to this country, when Malheur Lake was high and flowed out through the old river channel past the Malheur Cave and was the headwaters of the south fork of the Malheur River, a large party of Paiutes, warriors, women and children, were camped on the border of Malheur Lake while the women gathered roots, herbs and seeds to dry for winter food – An epidemic came which was taking the lives of many, especially the children. The Paiute medicine men were unable to cope with it. There was much misery, women weeping, children dying and mothers grumbling against the priests and beginning to doubt their potency.

It happened that a group of Bannocks from Idaho, or other points east were visiting at the camp with the Paiutes. The medicine men, who were becoming discredited and feared they would lose the respect and confidence of the Paiutes, in their extremity to save their faces and reputation, accused the visiting Bannocks of having cast a spell over the sick persons, and so eloquently pleaded their cause that the Paiute warriors attacked the Bannocks and all but exterminated the entire party.

However, one or more, at least a small remnant of the Bannock party escaped death and returned to Idaho. Upon being told of the cruel massacre of their tribesmen and the reason for it. Bannock warriors assembled a large party and started for Malheur Lake with the intention of avenging the death of their fellows. When the invading party was yet several days off and in camp, a coyote slipped into camp and overheard the boasts of the Bannocks and their intention to kill the entire band of Paiutes.

The coyote, being a friend of the Paiutes, ran ahead of the invaders and warned the Paiutes, telling them of the overwhelming numbers and advised the Paiutes to take refuge in some safe place as they could not hope to withstand the invaders. The coyote told the Paiutes of Malheur Cave with its living water, where even though they were less in numbers, they could hold out against the greater odds.

The Paiutes heeded the advice of the coyote, gathered up their supply of food and camp equipment and hurried to the cave. The entrance was barricaded with rocks and, although the warring Bannocks discovered the Paiutes, they were able to keep them off.

At first the Bannocks believed they could starve the Paiutes out not knowing of the water and food supplies and remained around the mouth of the cave for days, sending hundreds of obsidian-pointed arrows into the entrance and around the mouth of the cave. After many days the invading party withdrew and the coyote followed them on their journey for a few days, finally returning to his Paiute friends with the assurance that their enemy was well out of the country and it was safe for them to come out.

The Paiutes removed only enough of the rocks to provide an exit, and that is how the entrance was found barricaded by the first white men and the reason for the presence of hundreds of arrowheads at its mouth and for some distance back into the cave. That, also is why the Paiutes, in the long ago, revered the coyote and would not kill him. He was considered the wisest, slyest and most cunning of animals.

In the days before the coming of the white man, Paiute Indians believed in transmigration of souls to the coyote and later to a heaven, where all were restored to youth and lived forever midst plentiful wild game, flowers, trees, lakes and streams.